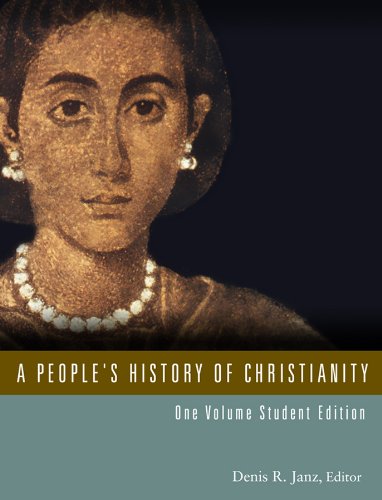 A People's History of Christianity, One Volume Student Edition
$35.03
By Denis R. Janz

I’m not typically drawn to introductory church history books. There are some fine classic surveys (e.g. Shelley’s Church History in Plain Language, Gonzales’s The Story of Christianity, etc.), and often new texts don’t offer much new information or perspective. But Denis Janz’s A People’s History of Christianity series is a unique addition to the field that needs to be engaged in some way by all those with an interest in the history of Christianity.

And Fortress Press has made it easy to interact with this distinctive treatment of church history, whether one is a rabid bookworm undaunted (and even delighted) by the prospect of reading thousands of pages or just wants a 300-page introduction. Originally a seven volume series, the content was distilled into a two-volume student edition [editor’s note: see our review of the Student Edition volume one and two] as well as a one-volume student edition, the latter of which is the subject of this review.

Whereas the discipline of church history has typically focused on a small segment of Christians (the elite, the clergy, the famous heretics—the movers and shakers), there is a new approach dedicated to studying the ordinary Christians.

“It insists that ‘church’ is not to be defined first and foremost as the hierarchical-institutional-bureaucratic corporation; rather, above all, it is the laity, the ordinary faithful, the people. Their religious lives, their pious practices, their self-understandings as Christians, and the way all of this grew and changed over the last two millennia – this is the subject matter. In other words, the new church history is a ‘people’s history’” (3).

This one-volume student edition is a selection of essays from the seven-volume series, which is itself a sample of the best work that has been done from this cutting edge approach. In two-hundred and forty seven pages comprised of eleven chapters, this book surveys the entire span of church history from the first century to the twentieth. Some of the chapters cover specific periods (e.g. the first generation of the Jesus movements, the Protestant Reformation) while others cover topics such as the place and role of food, social reform, and rituals and beliefs concerning death.

In some ways this book might be a challenge for conservatives (e.g. the way Q is cited in chapter one), but there shouldn’t be major concerns for those with discernment. Two drawbacks to this volume are simply due to the condensed nature of this volume—one is that topics are not covered in depth, and the reader will invariably find a topic missing that she wants to know about, and/or find a topic insufficiently treated. The other is that there’s very little attention paid to the Church outside the West. A people’s history by definition needs to be representative of all the peoples. In the full series, volume 7 is entirely dedicated to twentieth century global Christians, so for those who choose to read either this one volume student edition or the two volume student edition and forgo the full series, it would be highly beneficial and to read volume 7 in addition. The center of gravity of Christianity has shifted from the west to the global south, and we ignore the history and story of Christianity in the non-west to our detriment.

A People’s History of Christianity would make an excellent supplementary text either in a one-semester church history course or as a quick introductory read for individuals. Although the perspective presented here from the ordinary lay Christian is novel as well as significant, this book should not supplant a conventional text that focuses on the clergy and theologians. For both a two semester course (as well as, anyone who wouldn’t have trouble reading a bit more), the two-volume student edition would be better as it presents more essays and goes more in-depth. As mentioned above, either way, get volume 7 from the full series for a global perspective on a people’s history of Christianity.

Jennifer Guo is a bean counter by day and a book eater by night. She is passionate about the gospel and loves biblical and theological studies. She also loves the arts and is part of a performing arts ministry that uses a variety of mediums to communicate the gospel, God’s heart, and His design for sexuality, relationships, and marriage. Jennifer also loves running and cooking (and not because running allows her to eat more). You can follow her @JenniferGuo or read more reviews at her blog Jennifer Guo.