Interview & Giveaway: Hymns of the People

Tweet
I love repurposed hymns. Check out my Spotify playlist for hymns. I’m always on the look out for new bands that do justice to my favorite hymns. That’s why I was delighted to discover Hymns of the People. They’ve created one of my favorite arrangements of “Doxology’ and I’ve had their album on repeat since my discovery.

I connected with the band on Twitter and they were gracious enough to agree to an interview and to offer their album for free via the giveaway above.

Can you tell me a little bit about the band members?

What drew you to repurpose hymns?

After playing worship music for a couple years together, we began to grow weary of playing songs that seemed to all sound alike. As artists, we wanted to explore repurposing hymns by creating new arrangements. There is so much beauty in the language of hymns and we want to help restore their place in corporate worship gatherings today.

What’s the most challenging part of putting a traditional text to a new tune?

We decided early on that we wanted to keep the integrity of each hymn’s melody. With that in mind, we began playing with the arrangements. The most challenging part was figuring out how we wanted to use meters and time signatures in a unique way to emphasis certain lyrics and emotions in the songs. While challenging, it was also a ton of fun because we felt freedom to explore a million different ways to re-paint these hymns.

What has God taught you through this project?

God has taught us the beauty of collaborating and creating within community. Since three of us are involved in the arranging and playing, God has shown us that every idea is better when made in community with one another.

My favorite hymns from your albums are “Come Thou Fount” and “Doxology.” The “Doxology” especially is such a well know text and tune and you’ve managed to give it a fresh vibe that still resonates with the original version I was used to singing. What was your favorite tune to create? Most difficult?

The idea for “Come Thou Fount” started very early in the dreaming stages of Hymns of the People. This was probably the most difficult song for us to record not because of musical technicalities but because of the raw emotion captured in this hymn. “Come Thou Fount” sums up perfectly why we dedicate ourselves to reintroducing hymns in a creative way. Robert Robinson wrote the hymn in 1757. In the last stanza of the hymn he writes, “Prone to wander, Lord, I feel it, Prone to leave the I love. Here’s my heart lord. Take and seal it, seal it for thy courts above.” The story goes that Robert was riding a train in the late 1700’s and heard a young lady humming the hymn he wrote and he responded to the young lady, “Madam, I am the poor unhappy man who wrote that hymn many years ago, and I would give a thousand worlds, if I had them, to enjoy the feelings I had then.”

Robinson struggled with faith and doubt. And in the lyrics above, he captures what many of us feel at some point in our spiritual journey. This is why we made the choice to dedicate ourselves to reintroducing hymns in a creative way. It allows us to connect with tradition that extends back hundreds of years. This connection not only gives us deep roots that connect us more deeply with our faith, but it also provides a personal narrative that both encourages and consoles.

“Doxology” was so much fun to record. It’s a hymn that we use to do often at Willow and, like all of the hymns that we record, we want to maintain the integrity of the melody, but we also wanted to freshen it up, so we decided to get creative with the interludes and the ending. The odd timed interludes help emphasize certain words throughout the recording: “Praise God, from Whom all blessings flow; Praise Him, all creatures here below; Praise Him above, ye heavenly host; Praise Father, Son, and Holy Ghost.”

Another favorite we enjoyed recording was “Come Ye Sinners” from Phase One. The words are a great reminder that God invites everyone to the table. As we collaborated in the studio, it began to take on the sound of an upright piano being played recklessly and joyfully in an old time saloon.

What was the inspiration for the album art?

The album art was created by Dianne Chavez. She is a high school senior in Chicago. We want to celebrate creativity and highlight other artists in this project. We felt like this was a perfect opportunity to do that for Chavez. We sent her the hymns, she listened for a week, and came back to us with the album art. Needless to say we were blown away. . . come on! It’s a narwhal, with a mustache and a monocle, drinking tea on the bottom of the ocean while listening to a phonograph. So fun! 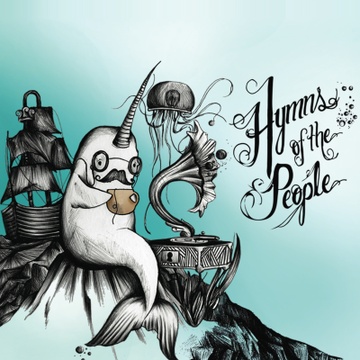