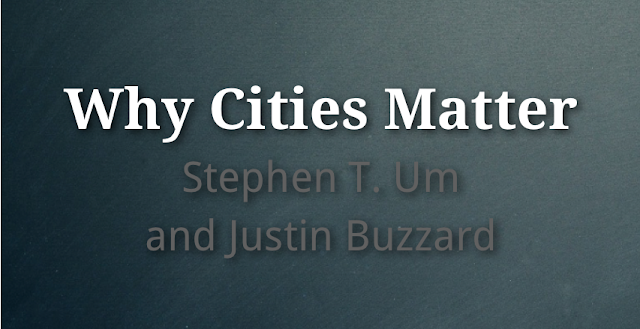 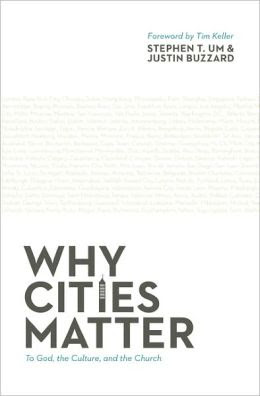 Stephen Um & Justin Buzzard urge Christians to consider how they interact with cities and argue for primacy of cities in the redemptive narrative. “The city stands as one of our great hopes for renewing our broken world” (p. 17). That’s a pretty substantive claim so I was eager to see how they would lay out the biblical argument for it.

They provide a summary of the book so I’ll let them sum it up. Here’s what they say.


The first chapter seeks to answer the question, “What is the importance of cities in our world today?” We consider the past, present, and future of cities, along with some basic categories for identifying a city. Chapter 2 looks at the way that cities function, and asks, “Why do cities play such a cru- cial role in our world?” We find that there are several common char- acteristics that explain the cultural prominence of cities in our world today. The crucial task of determining what the Bible says about cities is taken up in chapter 3. Then, in the last three chapters, we consider various issues that face those seeking to minister in our world’s cities: chapter 4 looks at the topic of contextualization; chapter 5 explores how we should relate to our city’s dominant storyline; and chapter 6 thinks through the development of a ministry vision for your city. (p. 20)

An interesting tidbit before presenting my own verdict on their argument. They argue one contributing factor in the success of the Protestant Reformation was the growth of cities and the development of technologies in it like the printing press.


It was at the height of this wave of urbanization that the Protestant Reformation occurred. It was “a uniquely urban event.” With the invention of the printing press, tracts and Bibles spread throughout densely populated cities and towns. The reaffirmation of the priesthood of all believers, along with the validation of secular vocation, created a new ethic for urban life—one that would help pave the way for urban advancements in technology, production, and social life for future centuries. (pp. 24-25)

Now to the larger arguments.

“The city stands as one of our great hopes for renewing our broken world” (p. 17). This quotation as I said is central to the argument in the book. Can this emphasis be proven biblically? For a sample of the kind of argument from the text.


With this in mind, we can see that the optimism of the new ur- banist is based in part on the reality that cities are ideal places for human flourishing. We see this in the Psalms where the creational language of flourishing (“springs of water”; “fruitful yield”; “multiply greatly”) is connected with an earthly city that the Lord provides for his people (107:4-9, 35-38). The prophet Jeremiah is unafraid to con- nect the flourishing of an exiled people with the well-being of a pagan city (“in its welfare you will find your welfare,” Jer. 29:7). In the same way, we can look at the welfare of our present-day cities and find both the blessing of God’s common grace and the foreshadowing of the promised final city. (p. 52)

Reading these passage I don’t see a forceful link between their reading of the text and the emphasis placed on missions specifically in the city (see chapter 3 for a more developed theology of the city in the gospel narrative).

I agree with much of what they say but some of the biblical connections seem forced. For instance, they argue for the primacy of cities based on Jesus’s being born in Bethlehem (p. 67). A quick Google search turned up more recent population surveys for Bethlehem which make it more like a small village and less like the mega-cities we have today. The point seems forced.

Their strongest points are found in the examination of Paul’s missionary strategies (pp. 73-76) and the new city of Revelation 21 (pp. 80-83). Paul’s strategically plants churches in the hubs of culture, religion, power, and trade in his day spreading the gospel outward. The Bible ends with the New Jerusalem coming down from heaven. So the imagery of a city does play a role in the developing gospel story.

Urban missions is a topic I’m passionate about--maybe that doesn’t come through fully in this review. I love cities. Stephen Um is a pastor in one of my favorite cities Boston. Any disagreement comes more in degree not substance. One danger possible in over emphasizing is seeing rural ministry as a stepping stone to the real work of city missions. Darryl Hart argues this very point in an article he wrote, “If Cooking Slowly and Growing Organically are In, Why Is Rural Ministry Out?” The balance in emphasis I’m concerned with is important so we don’t miss the image of God in these rural communities. You don’t have that kind of rural devaluing in Why Cities Matter but that mindset may be more common in ministries that over emphasis urban ministry over rural ones.

Disclosure of Material Connection: I received this book free from Crossway. I was not required to write a positive review. The opinions I have expressed are my own. I am disclosing this in accordance with the Federal Trade Commission’s 16 CFR, Part 255: “Guides Concerning the Use of Endorsements and Testimonials in Advertising.”