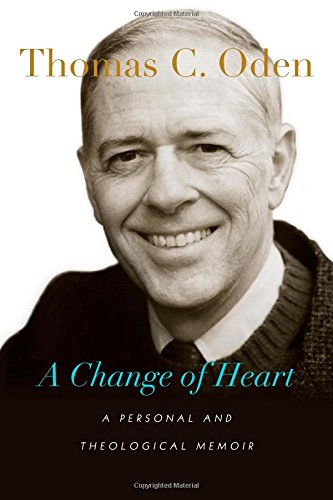 The title A Change of Heart gets at two main threads through out this book. First, Oden changes heart on issues of politics and theology—moving from a liberal socialists to a classical Christian rooted in the truths of the early Church Fathers. He contrasts these times of his life well when he says in the first part of life he was mainly concerned with novelty in his theology but after his change of heart he committed to writing nothing new (144). “To be orthodox is to be grounded in the earliest consensual classic Christian teaching” (161). Second, God actually changes Oden’s heart from a heart of stone to a heart of flesh. This change comes through many ordinary means and through friendships with those who he loved but disagreed with.

Prior to reading this memoir, I knew very little of Oden. I knew he had moved from liberal to more conservative on the authority of Scripture and I knew he was Arminian. After reading this memoir, I’ve realized I must read more of Oden. As I mentioned, he relentlessly pursues mere Christianity in the theology of the Church Fathers. I’ve read many memoirs by mostly young millennial and have come to pretty much loath this genre. Partly because most of these memoirs drip with faux humility and usually show how their mind changed by taking some road trip or going to college or some other “major climax” to their story (“In college days I was wary of the temptation to focus any serious religious arguments tied to my own personal experience” 177). I’m always left wondering, “Will this matter in 40 years.” Oden gets why I think I feel this way,

A steady principle of biblical teaching is that only from the end do we understand the beginning. We understand slavery in Egypt from the viewpoint of the exodus, and the wilderness from the viewpoint of crossing the Jordan. We understand the life of Jesus from his death and resurrection. So with me, the meaning of the first half of my life has been made clear by the last half. The prodigal son had to try out every wrong path in a far country before he found the right path home. Only after his testing of futile ways was he ready to come home” (178).

I can’t help but think many of the memoirs written by people in their twenties and thirties can’t understand their own story because they have not reached the end in any meaningful way. Oden then has written the anti-millenial memoir. He shares his life story with a deep humility that’s palpable on each page. It made me feel like as he was writing these stories and in the back of his mind was thinking God’s grace is amazing. I’m undeserving. And the change doesn’t seem forced or shallow.

One of the most interesting components of A Change of Hearts is how many truly interesting people Oden interacts with. He teaches us a valuable lesson in developing friendships and partners with those we differ with for mutual sharpening of the mind. A Jewish colleague, for instance, encouraged him to study Christianity more seriously. Oden reports this incident, “Suddenly my irascible, endearing Jewish friend leaned into my face and told me that I was densely ignorant of Christianity, and he simply couldn’t permit me to throw my life away” (136). This was said, mind you, after Oden had accomplished very much in the eyes of most. It was this friendship-in-contrast that played a major role in the Oden of today who went to accomplish so much more.

Because of his own change of heart from modernist to classic Christian, Oden also provides invaluable insights into the psyche of modernists and liberals alike. In buttressing the authority of God, he writes,

“No modern ideology has such a lengthy continuity of witness. Scientific inquiry has had little more than two centuries to establish its orthodoxy. The apostolic consensus has had two millennia. My questions about decaying modern culture were being decisively shaped by the communion of saints who have lived through far deeper crises than this modernity” (141).

He also talks about many of the challenges he faced in the mainline United Methodist Church and at the liberal Drew University. I think he models what a thinking, careful opposition to liberalism might look like and the potential “good” of heresy. He describes it almost in the terms of a vaccination: “The providential reason God allows heresy among the faithful, according to the ancient Christian writers, is to challenge the worshiping community to correct its exaggeration so as to bring it back into the balanced consensus” (165).

Ultimately and most importantly, Oden conveys a deep love for God and His Church. Proclaims Oden,

“Theology is the study of God. The study of God is simply to be enjoyed for its own incomparable subject, the One most beautiful, most worthy to be praised. Life with God delights in its very acts of thinking, reading, praying and communing with the One most worthy to be beheld, pondered and studied, not for its written artifacts or social consequences but for joy in its object” (147).

And amidst his rigorous academic work at Drew, I always got the sense that deep pastoral concerns fueled his work. Whether that be in his leadership in the Ancient Christian Commentary on Scripture, which is designed with the lay reader in mind, to his book Requiem, which dealt with his concern for the ordinary Christian in the pew and how they were impacted by liberal theology coming out of the mainline universities, or several of his books dealing with issues directly related to pastoral care. The Oden who was world renown as a Bible scholar never forgot his rural Oklahoma roots and the ordinary church folk. That’s to be admired.

Some of my readers might find fault with Oden’s wide ranging ecumenism. But don’t let that change your mind on reading A Change of Heart or hold you back from placing some of his most important books on your reading list. He is a figure deserving to learned from and read.