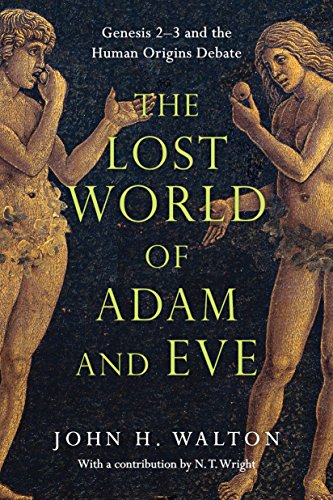 In May 2014, I read John H. Walton’s The Lost World of Genesis One and was challenged by Walton’s Scriptural seriousness and exegetical rigorousness. “As interpreters of Scripture and as theologians, we are accountable to the biblical text ” (12).

It was a set up. I didn’t know at the time, but The Lost World of Adam and Eve was a companion volume expanding the thesis of Genesis One. In a nutshell, Walton argues the creation account is primarily about function, not material origin. Once you’ve agreed with him on that point, it’s hard not to agree with him in Adam and Eve.

That being said, the conclusions in Adam and Eve are a lot more difficult to accept, not because Walton hasn’t done good work, but because they cut even deeper into my theological presuppositions.

He makes some great arguments about the Sabbath and the necessity of God’s work and rest on the seventh day. “In that inauguration ceremony, the functions of the temple are proclaimed, the functionaries installed and rituals are begun as God comes down to inhabit the place prepared by his instruction” (50). God had made a house, but now creation was His home.

Also, his section on the imagery of Eve being created out of Adam’s side was one of my favorite (pp. 74-81). Walton argues that the image is more than a rib being removed. It’s God tearing Adam in half. With the imagery of sleep in that passage, I immediately thought of God cutting a covenant with Abraham (Gen. 15). If Walton is correct, that’s strong covenant language for Adam and Eve.

On the flip side. I’m not convinced of the archetypal argument. Walton is quick to note his position doesn’t mean Adam and Eve aren’t real people in time and space (“Proposition 11”). He makes a good a point with their names for his view. The story calls them Adam (humanity) and Eve (life). He also makes an interesting argument about the way Melchizedek is described (pp. 99-ff). For Walton, those arguments and more place Adam and Eve in the archetypal category, but the exegetical concerns of passages like Romans 5 still hold me back. For Walton the archetypal view, for instance, allows Christians to accept the work done on the human genome project (“Proposition 17” and “Proposition 20”). N. T. Wright’s chapter deals with those NT passages mentioning Adam. He argues the NT authors are more concerned with the effects of sin than with human, material origins. In his view, Adam lost his authoritative reign in the world, so Christ’s crosswork restores humanity on the path to steward God’s creation as His image-bearers ambassadors, not just for fellowship with Him (pp. 175-76).

Also, another point of difficultly for me was understanding Walton’s position of death before the fall. I’ve given much thought to what death before the fall could look like. Walton moves the marker farther than I have seen. He argues Adam and Even were created mortal. They would have died. In this view, death isn’t necessarily evil (in opposition to God’s declaration of good). God’s declaration of goodness was pointed to creation’s functioning rightly, not the lack of death for animals and man. In this view, original sin is no longer passed down from Adam losing immortality, but from Adam losing the opportunity for immortality (“Adam was the ‘first’ man given the opportunity for life” p. 115; “Paradise ungained,” “We did not lose paradise as much as we forfeited sacred space” p. 145).

I highly recommend The Lost World of Adam and Eve. Walton will challenge your presuppositions, but in a way that honors the authority of Scripture. Even if you know you will disagree, this practice will instil humility as we dialogue with others who love Scripture, but may hold a different interpretation of Genesis 3 than we do. My head is still spinning from reading Adam and Eve. It’s one I need to read again and also one that I would love to see a book length counter to.