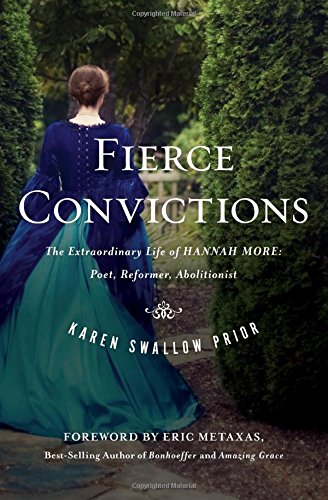 Hannah More. Have you heard of her? I hadn’t before seeing advertisements for Fierce Convictions pop up on several of my social media feeds a few months back. The cover made me think of Jane Austen. It also stated More was a “Poet, Reformer, Abolitionist.” That’s all I knew.

Well I just finished Fierce Convictions —I loved it. It’s my surprise best read of the year so far. I enjoy biography so I was expecting to be entertained. But this book hit all the high notes for me. Prior weaves in themes that I love—friendship, justice, fortitude, sacrifice. The story is well-crafted and honest. And More’s life has something to teach us all.

Early on Prior tells us, “But with this letter, along with many other words from her pen, More painted a picture she hoped might move her friend’s imagination. Perhaps then his heart, mind, and actions would follow” (xviii). Imagination. Something that played a crucial role in More’s success as a writer and also as a social activists. Her writing was successful in changing hearts, minds, and actions because it attacked the imagination of a nation. More’s imagination wasn’t pointed only at slavery, but also at, as will be noted below, helping the poor of her own country. She also set up a type of insurance for the poor (152) as well as the education for poor children in Sunday school.

Prior starts by re-telling the history of More’s family. She avoids the well-worn hagiography. She’s honest when the picture is blurry and sets the stage for the rest of More’s life. She also goes on through the book to tie More’s life to other interesting people of that time and also major events that More influenced. The meat of the book deals with More’s rise to prominence in London as a writer who was successful in her interaction with those above her natural station and also uncomfortable eventually receding back to the country.

During her time in London, More interacts with luminaries like Samuel “Dictionary” Johnson, John Newton, and William Wilberforce. The beauty of Prior’s storytelling lies in the way More never moves out of focus even in the midst of these major players. She is center stage even when they enter. Also, a subtle theme through out is friendship between the opposite sex. I’m always amazed at the fearfulness with which Christians today approach the opposite sex. We treat each other as objects of lust, not image bearers. Friendship is completely off the table. It’s enough to make sure there’s no immorality happening. In my experience, this kind of mindset causes the problems it’s intended to prevent. But More has close friendships with many men during her life and there’s not a hint of the fear we experience today. What’s more these relationships are essential for the flourishing of More and then men she’s friends with.

Also, due to More’s social activism she sometimes found herself the target of attacks. It’s interesting (and Prior makes this point) that pamphlets were the equivalent of modern blogs. And faux rage and shame were not unique to Twitter (155-56). In one controversy that lasted for almost three years, More says, “she had been attacked ‘with a wantonness of cruelty which, in civilized places, few persons, especially of my sex, have been called to suffer’” (156). All of this arising from the fact that More wanted to educated poor children.

Imagination, friendship, social justice—all areas where the church could learn from More. Also, we hear a lot about the likes of William Wilberforce, but we rarely hear about someone like Hannah More. We rarely read about brave and bold women in history. But More played a central role in many of the social justice issues of her day. She cannot and should not be ignored.