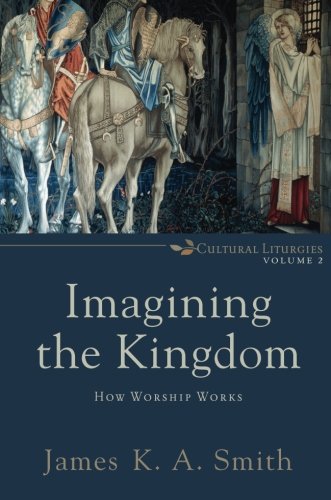 “When we worship on Sunday, it spills over into our cultural labor on Monday” (3).

Imaging the Kingdom is volume two of James K. A. Smith’s Cultural Liturgies series. I previously reviewed volume one Desiring the Kingdom. At the core, Smith argues, “[W]e are, primarily and at root, affective animals whose worlds are made more by the imagination than by the intellect—that humans are those desiring creatures who live off stories, narratives, images, and the stuff of poises” (xii). Smith’s stated goal is “the renewal of practice” (xvii). If the end of worship is action (going into the world) then we must “recruit our imagination” (6). Our imagination is what will grab our hearts as we go out into the world on the missio Dei. Love and our affections are at the center of his proposal (7).

Imaging the Kingdom splits into two neat parts. Part one reviews French theorists Mzerleau-Ponty and Bourdieu laying the foundation for his liturgical anthropology. Part two offers a more “tangible discussion” that the “theoretical toolbox” from part one furnishes (xvii). Part one is technical and more in depth as Smith explores Ponty and Bourdieu as a foundation for the more practical concerns of part two. I would encourage the average reader not to become discouraged as you read through. You may not catch everything, but these chapters are important as Smith connects all the links in part two.

One key take away. Smith argues again and again that many of our actions are not thought decisions, but more like embodied reflections of what we love (see below and also 106). For example,

“We don’t ‘decide’ our way into every action. Our being-in-the-world is characterized by inclinations that propel us to all sorts of action ‘without thinking’” (79-80).

“That emotional perception of a situation is not merely a hardwired, biological reflex; it is an acquired habit, a product of a passional orientation that has been learned in and through paradigmatic stories. And those stories and narratives that prime and orient my very perception of the world tap into deep wells of my embodied unconscious. I learn these stories with my body” (39).

I was reading Imagining the Kingdom as much of the unrest erupted over Michael Brown and Eric Garner’s death and this point struck me as a reason for the tension especially among Christians on both sides who might speak of racial reconciliation, but when it comes down to the grit of getting it down cannot agree and do not understand. There’s a story and narrative behind all of this that as Smith says primes the response we give to situations like this, and so to move past talk we must understand these stories and narratives and also enter each other’s habituation process. That’s why talking about racism being a gospel issue isn’t enough unless it is accompanied by embodied habitation together.

That is a great transition into part two. Smith says, “[M]undane routines conscript us into a larger story that begins to shape who we are, what we love, and hence what we do. Our hearts traffic in story” (108). It is not enough, therefore, to have grand plans to change the world. It must start with our very ordinary daily activities. Smith goes on,

“Our identity and love are shaped ‘liturgically’ precisely because liturgies are those rituals and practices that constitute the embodied stories of a body politic. . . . Liturgies are compressed, repeated, performed narratives that, over time, conscript us into the story they ‘tell’ by showing, by performing” (110).

This mundane liturgical task must be taken up by the church in the church so that she can send out Christians to take up their “creational and re-creational calling—to bear God’s image for and to all of creation” (151). That is how we re-story the world. By going out, living, and working with Christian imagination. Smith says,

“We don’t just need teachers and preachers and scholars and ‘doctors’ of the church to tell us what to do; if the gospel is going to capture imaginations and sanctify reception we need painters and novelists and dancers and songwriters and sculptors and poets and designers whose creative work shows the world otherwise enabling us to imagine differently” (163).

I cannot recommend Imagining the Kingdom highly enough. It’s a much needed corrective for the Church especially in our current climate where secular liturgies often are more formative. Christians have failed to tell and live our story in a way that’s believable and affective.