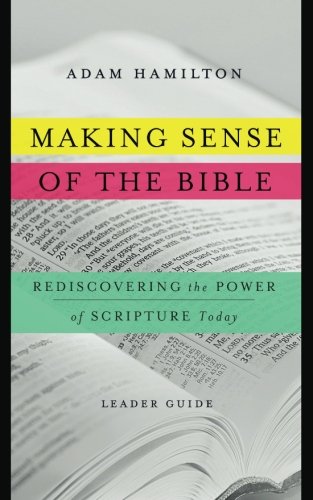 Making Sense of the Bible [Leader Guide]: Rediscovering the Power of Scripture Today
$11.69
By Adam Hamilton

There’s no denying that the Bible contains things that are hard to understand; there are issues that not only non-Christians and new believers wrestle with, but issues on which even “professional” Bible scholars disagree (as can be evidenced by multi-view books on topics such as the Canaanite genocide, the historical Adam, etc.). And the difficulties aren’t just with seemingly theoretical issues that largely do not affect our daily lives—issues such as the biblical view on gender, sexuality and marriage are in the heat of debate in our day, with profound societal ramifications.

Adam Hamilton, founding pastor of the largest United Methodist Church in the U.S., has written Making Sense of the Bible – Rediscovering the Power of Scripture Today to help the average person in the pew make sense of the Bible. He notes that the aim is not to offer a scholarly treatises on difficult questions in Scripture, but to “distill down (not dumb down but rather summarize and express the essence of) the work of scholars, while offering my own reflections as one who preaches and teaches the Bible and who regularly engages with questions from laity and pastors alike” (6).

The purpose statement above betrays what gives me the most grief regarding this book—Hamilton makes it seem like he is distilling scholarship in a representative, unbiased way, when in fact the views he summarizes, espouses, and argues for are those of mainline consensus. Of course, the discerning reader would pick this up quickly in the book (in fact, right away from the endorsements on the back cover); however, the target audience and those most likely to read this book might be unaware of this, thinking that what they’re reading is an orthodox treatment on the issues.

Making Sense of the Bible is divided into two main parts. Section One deals with the nature of Scripture itself, touching on issues such as authorship of biblical books, inspiration, the authority of the Bible, and canonization. Section Two builds on that foundation to address various issues such as the creation accounts, God’s violence in the Old Testament, women in ministry, and homosexuality.

Some of what Hamilton writes I wholeheartedly agree with (such as when he speaks out in chapter one against popular conceptions of the Bible as an owner’s manual, basic instructions before leaving earth, Magic 8 Ball, systematic theology book, and book of promises from God); much of the historical background he provides is indeed accurate; and in other places, even if I disagree personally, the views he argues for are held by scholars that I respect (such as the archetypal view of creation defended by, for example, Dr. John Walton) and held by those who can rightfully be considered evangelical.

But there are glaring problems. Most concerning are the foundational views regarding the nature of Scripture that Hamilton asserts. Over and over again, he emphasizes the human aspect of the Bible and neglects the divine. While human authorship and interpretation is certainly undeniable, it’s not the full picture; but for Hamilton, it does seem to be. A representative quote is the following:

“They were writing to interpret the history in light of the needs of those to whom they wrote. There was an agenda for their work. History is told from the perspective of the teller, often to meet the needs of the people in a given time. These books [of the Bible], and all the others we’ve talked about, were the work of the thoughtful scribes who were carefully considering what parts of Israel’s story needed to be told and how it needed to be told to address the real needs of the community for whom the story or book was being written” (42 emphasis original).

Speaking about the writing of the New Testament documents, Hamilton writes, “These early Christians may have written under the same kind of inspiration we experience today, but what differentiates their writing from ours is that they were closes to the events described” (138). This quote presents the most alarming and problematic thing about Making Sense of the Bible—it’s written from the perspective that the only thing that differentiates the Bible from something written about God today is proximity to the events described. For Hamilton, “The most important dimension of inspiration may be how God uses the words of scripture to speak to us today” (142). He further argues that the Bible is not the word of God but people’s words about God, and (naturally, by extension) that the Bible is not inerrant nor infallible.

Hamilton also repeatedly pits Jesus and the Scriptures against each other (e.g. p. 176), neglecting to mention Jesus’ own view of Scripture. He concludes Section One by asserting that “Christians may legitimately set aside clear teachings of Scripture as no longer binding, seeing them as written primarily for another time and nor reflecting God’s timeless will” (177). Well, if that’s the case, anything’s game. And this is the perfect segue into Part Two, setting the reader up with a hermeneutical foundation that will see no issues with the liberal/revisionist perspective of Part Two. Regarding whether Jesus is the only way to salvation, Hamilton states, “The inclusivist perspective seems both more consistent with the character of God revealed in Jesus and more just” (252). In typical revisionist fashion, Hamilton argues for homosexual “marriage”; four times in this chapter, he reiterates the claim that some of the Bible is simply “out of sync with God’s will as we understand it today” (271)

As mentioned above, there are some things in this book that I agree with. There are other positions I personally disagree with but see as positions that can be held by evangelicals. I also have no doubt that Hamilton loves God and is wholeheartedly seeking to love and serve His people; that he loves the Bible and genuinely desires to help Christians understand it. I don’t think his intention is to deceive; it really seems that he thinks that he has found the truth, the better and more accurate way to understand the Bible. But his way, the liberal/mainline way, is fundamentally at odds with what the Bible claims for itself within a responsible theological and hermeneutical framework. I cannot recommend this book to anyone seeking to make sense of the Bible; in fact, I fear for the Christian who picks up this book looking for answers.

Jennifer Guo is a bean counter by day and a book eater by night. She is passionate about the gospel and loves biblical and theological studies. She also loves the arts and is part of a performing arts ministry that uses a variety of mediums to communicate the gospel, God’s heart, and His design for sexuality, relationships, and marriage. Jennifer also loves running and cooking (and not because running allows her to eat more). You can follow her @JenniferGuo or read more reviews at her blog Jennifer Guo.