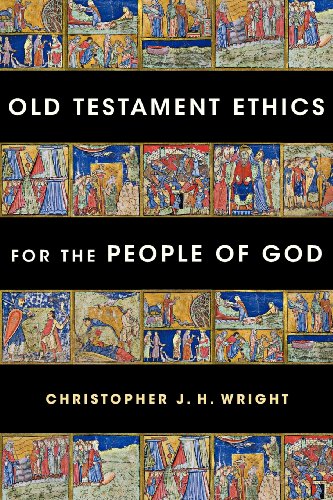 Old Testament Ethics for the People of God
$21.92
By Christopher J. H. Wright

Old Testament Ethics for the People of God explores the worldview of Israel as a nation. Wright reconstructs this worldview through “their beliefs, stories, and worship” (19). Also, Wright consistently employs a “broad matrix of self-understanding” to “pinpoint three major focal points” (ibid) or angles—the theological angle (“The LORD, as the God of Israel”), the social angle (“Israel themselves as an elect people in unique relation to the Lord”), and the economic angle (“The land Israel believed the Lord had promised and given to them”) (ibid). This grid underlays all discussions of the Old Testament ethics in this book.

Part one explores this grid in-depth and how it provides structure to the Old Testament ethical laws. He contrasts situational ethics of our day with Israel fundamentally theological ethics (23). What I appreciated most in this section was that Wright connects all ethics back to the person and work of God. For instance, “How we behave depends on what or whom we worship — then as now. So for Israel, ethical behaviour was defined by the identity of this God, their God, Yahweh, ‘the LORD our God’, [sic] the Holy One of Israel” (25). He makes this point when discussing the shema (46). I am the Lord your God is fundamental in understanding the ten words that follow. A different god means a different ten words, and different imperatives for ethical living. He also spends a lot of time talking about God’s redemptive action in delivering Israel for Egypt as foundational for understanding the giving of the law and the ethical expectations. The gospel (God’s action in redeeming Israel) always comes before the law (34-35). God acts unequivocally for us. We respond in worship and obedience. Wright explains:

The sequence of events in the biblical story is very important. God did not reveal his law to Moses on Mount Sinai when he first met him there at the burning bush. He did not then send him down to Egypt with the message ‘This is God’s law, and if you keep it fully from now on, God will rescue you out of this slavery.’ Israel was not told they could deserve or hasten their own deliverance by keeping the law. No, God acted first. God first redeemed them out of their bondage, and then made his covenant with them, a covenant in which their side was to keep God’s law, as their response of grateful obedience to their saving God” (27 also see 29, 39, 42).

That’s crucial for understanding everything Wright goes on to investigate in parts two and three.

The second chapter in part one explores the social angle and in particular the missional concept of Israel being a light to the nations (63) and how the theological foundation created missional and ethic impetus. He’s got an excellent discussion of how the rehearsal of stories (in this case the Exodus) creates culture, community, and action (69-71). The economic angle then is described as a “gauge for how things are going at the other two angles” (77). Proper theological foundation and missional focus creates a thriving economic angle where righteousness and justice thrive. He looks through many of Israel’s given case law and examines how these are woven into the fabric of the theological and social angles.

“The Lord was not ‘content’ to be merely the God of history and festivals. The LORD was God of the land and all that went with it . . . . A nation that allowed itself to succumb to the same economic evils as the nations around them could not function as a ‘light to the nations’ . . . . [And] the prophets simply would not allow Israel to get away with claiming the blessing and protection of the covenant relationship for their society while trampling on the socio-economic demands of that relationship” (97, 98).

Part two takes all of the ground work from part one and applies it to large themes in the Old Testament. It’s interesting to me how radical and gracious the Old Testament law was for its time in history. Wright makes this point over and over again and warns against the kind of chronological snobbery that turns its nose down to Old Testament law because it doesn’t fit our modern presuppositions. As I was reading through this section, I was regularly caught myself thinking, these laws make a lot more sense than our current legal system. Or that’s a lot more equitable than this now. The strength of this section lies within the breadth of Wright’s knowledge and the way he makes that relatable within the larger story of Old Testament redemption. There’s too much in this section to get into much detail, but I found myself for the most part agreeing with Wright’s conclusions. Part three explores the history of study in this field. Not much to say here—because it’s outside of the realm of my expertise. But if you’re into knowing names, theories, and development of doctrinal thought, you’ll enjoy these chapters. Finally, he briefly touches on the question of Old Testament genocide. I found the appendix helpful, and he left me wanting more. He does hint that a book length treatment may come in the future. I think we need a smart, informed, evangelical answer to these kind of difficult questions. Without it, many Christians will disregard, ignore, and abandon much of the Old Testament.

You might think Old Testament ethics sounds boring. “Who cares about the ethics of people that lived such a long time ago?” but the same principles Wright discusses—the theological informing the social impacting the economic is still very much central for Christians today. Paul employs this same kind of structure in almost all of his letters. He reminds his listeners of the New Covenant stories and truths of the gospel then moves on to the social implications of those truths and then the economic for the Christian community. It also has much significance for the sanctification debate and the neat and tidy law/gospel distinction most common in Lutheran theology. Theological truth always moves to ethical imperatives and in the history of Israel the gospel always came before the law. And the distinction isn’t always neat and tidy. The law was a response to the gospel, an action sprouting from the rehearsed stories of redemption. I would argue not much has changed.

Old Testament Ethics for the People of God is one of my favorite reads of this year. If you’re interested in understanding the Old Testament better, you won’t find a more engaging, comprehensive, and exegetical founded book. And you will also find that your understanding of Scripture grows as a whole because of it.

Mathew B. Sims is the author of A Household Gospel: Fulfilling the Great Commission in Our Homes and writes for CBMW Manual, Gospel-Centered Discipleship, Borrowed Light, and other publications. He also works as the managing editor at Gospel-Centered Discipleship and offers freelance editing and book formatting services. He is covenant member at Downtown Presbyterian Church in Greenville, SC.