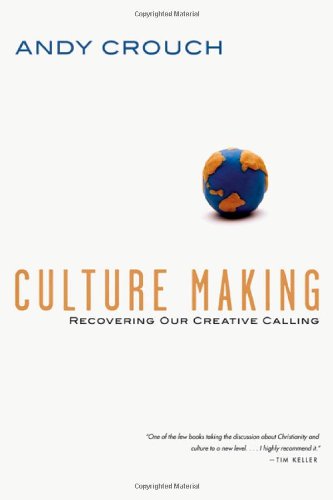 Andy Crouch wants Christians to think rightly about culture. And not only how we think about it, but also how it fits within the framework of what God has accomplished in the person and work of Jesus Christ. He says that he had “a hunch that the language of ‘engaging the culture,’ let alone the ‘culture wars,’ fell far short. . . . I also sensed that most churches were neglecting the centrality of culture to the bible story and the gospel itself” (p. 5) and “Indeed, the good news is the world is already changed, in a specific and astonishing way. God’s ways are not our ways. . . . The good news about culture is that culture is finally not about us, but about God” (p. 7).

That gospel rootedness reorients the entire discussion ongoing in the church. Culture making is less about what we do or accomplish and more about what God has already done and is doing in the world. Culture Making starts in Part 1 by defining and exploring what culture is (“Culture is, first of all, the name or our relentless, restless human effort to take the world as it’s given to us and make something else” [p. 23 also see p. 36 “culture is what we were made to do”]. Think God’s commands to take dominion and multiply); Part 2 moves to culture as seen through the gospel story; and Parts 3 ends with a look at our calling as culture creators. This section in particular examines the humility it takes to see what God is already doing in the culture and coming alongside that work, avoiding the traps of those who wish to change the world (something he looks at extensively). Crouch removes the heavy weight of world changing off our shoulders and places it squarely on the shoulders of the God-man who reigns and is actively present in the culture. It’s a call for ordinariness in a way. Crouch says that in age where the place of family is disregarded, God teaches that family “is still the heart of culture, the primary place where most of us are called to cultivate and create” (p. 12 see p. 55).

In an important section, where Crouch is seeking to make sense of culture, he says,

Rather, Culture in the abstract, always and only comes from particular human acts of cultivation and creativity. We don’t make Culture, we make omelets. We tell stories. We build hospitals. We pass laws. These specific products of cultivating and creating—borrowing a word from archeology and anthropology, we can call them “artifacts,” or borrowing from philosophy we can call them “goods”—are what eventually, over time, become part of the framework of the world for future generations. (p. 28)

That paragraph sets the stage in many ways for upcoming discussion with the terms of artifacts and goods and helps discern our place in cultivating and creating culture. One way Crouch progresses this discussion is in the way he examines culture past and present. For instance, he discusses how child labor laws have improved life for children, but asks with humility is that an improvement from a time when children cultivated and created alongside their family? (p. 55). I appreciated his sense of place and his honest eye for our current cultural place and the past. This humility is a vein through out Crouch’s analysis (see also pp. 202-03). He says, “Cultural creativity requires cultural maturity” (p. 77). Christians often approach culture poorly by seeing to transform the culture without learning the history of the culture or cultivating new, better culture as a replacement.

His discussion of the posture of Christians towards culture is essential as well. He talks about critiquing, consuming, and copying and then posits another posture rooted in the biblical narrative—cultivating and creating. “We are artists and gardeners” (97). Both examine and contemplate their landscape carefully and work purposefully. There is room for critiquing, consuming, and copying but these two postures must be fundamental for Christians. This understanding of our posture from the biblical story jump starts the exploration of culture in the biblical narrative in Part 2.

For me, Part 2 soars. His analysis of culture within the biblical framework excels and is desperately needed in the church. It seems, in churches, there are a lack of careful thinkers on culture, one reason I love Christ and Pop Culture. These are ordinary people thinking hard and with excellence about culture.

From Genesis 3, Crouch posits Satan’s temptation as the call to abandon the Garden as creative cultivators and simply consume (p. 114). And isn’t that one of the core issues facing the church today? Satan is still tempting Christians to step back from our culture places and stop cultivating and creating and mindlessly consume or relentlessly critique. One of the main story arcs from Genesis 1-11, Crouch says, is culture’s “attempt to deal with the consequences of sin. But this is a vain attempt, in all the sense of the world vain: prideful, self-regarding and futile. What human beings make of the world only deepens their alienation and independence from their maker. This is the germ of truth in all condemnations of culture. For all its moments of beauty and ingenuity, culture can easily be Babel: a fist-shaking attempt to take over God’s role for ourselves” (p. 117). Culture cannot deal with sin (see p.177), but it’s not all “rebellion and judgement”; it’s “also marked by grace” (124). Good culture then isn’t seen as savior, but more a result of the Savior who is already active and present in the world.

In dealing with Israel as a nation, Crouch notes how much more sophisticated the surrounding cultures were and the temptation was to borrow what God had forbidden (pp. 128-29). Israel sits at a culture crossroads as a means to demonstrate its status as “holy nation” to the nations. Its creative cultivation should’ve overflowed Jordan’s banks until it flooded the surrounding the nations and finally the entire world. That analysis provides a lightening rod for our own activity as creative cultivators as Christians in the new covenant. “God is on the move in history, and his work will no longer be contained within the story of just one cultural group. Indeed, the challenge to faith and dependence will be posed and will be available to every cultural group” (p. 145). There’s so much rich soil in this section, but that’s all that I will draw out for now.

Especially relevant considering current events in Ferguson and New York City is Crouch’s analysis of the powerful and powerless. He shows how the gospel cuts against the normal power dynamic (the powerful working for the powerful and abusing the powerless). “But to bring them [the powerful and powerless] into partnership is the true sign of God’s paradoxical and graceful intervention into the human story” (p. 209). The following exposition is just spot on as he shows different ways the powerful typically use the powerless and how God calls Christians to flip that script. He also describes power as the ability to “successfully propose cultural goods, suffuses every culture, every sphere and every sphere”—which highlights the importance of rightly using privilege and power and partnering with the powerless. And for those who might lose hope that change cannot occur Crouch reminds us that exodus and resurrection “grace-filled power” is on the loose in the world “and can quiet our deepest human fears” (p. 227).

Culture Making is a relevant and necessary exposition on culture. I encourage pastors, families, and individuals—all disciples of Jesus Christ—who seek to think rightly and biblically about culture to take your time and consider what Crouch has to say. His voice is needed in the church as we face different cultural difficulties today.