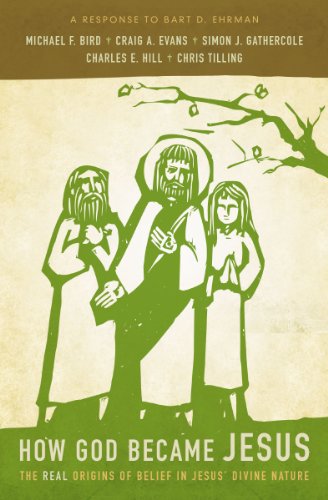 In chapter 1, Bird opens the book by noting the question of “when” Jesus “became” God is a loaded one, and that the question of Jesus’s divinity is ultimately a confessional one. However, the details of when, why, and how the followers of Jesus came to regard him as divine is a historical one that can indeed be answered by an examination of the evidence. “Such an enquiry can be responsibly pursued by mapping out the christological claims and religious devotion of early Christian writings in the first four centuries of the Common Era. This is the area in which we wish to critically engage the work of Ehrman directly” (12-13). Bird introduces this engagement by acquainting the reader with the “Early High Christology Club,” which argues for a “big bang” approach rather than an evolutionary one to the origins of a fully divine Christology. The figures mentioned here are luminaries in the field and must be engaged in any discussion of early Christology (key works are cited in the book for further reading concerning early high Christology).

In chapter 2, Bird engages with Ehrman’s first two chapters on divinity in the ancient world. Whereas Ehrman asserts that the majority of the Hebrew Scriptures convey a henotheistic view, Bird demonstrates that Jewish monotheism was generally strict. He also points out some of the errors in Ehrman’s methodology in using Greco-Roman conceptions of divinity to explain Jesus’s divinity. Bird notes early Christian beliefs about Jesus were a revised form of Jewish monotheism–a “christological monotheism.” In response to Ehrman’s assertion that “to make Jesus divine, one simply needs to think of him as an angel in human form” (Ehrman 61), Bird shows the new Testament authors present Jesus to be distinct from the angels and to have authority over them. In chapter 3, Bird first exposes some methodological errors and inconsistencies in Ehrman’s approach to historical Jesus studies. He then takes on Ehrman’s claims about Jesus’ self-understanding–mainly that 1) Jesus did not claim to be God, but rather, an apocalyptic prophet and messiah; and 2) he was not referring to himself when he referred to the Son of Man. Bird demonstrates Jesus believed that in his own person and ministry, YHWH was finally returning to Zion to renew the covenant and fulfill His promise of a new exodus. Bird does an excellent job showing that Jesus viewed himself as the Son of Man and that in the Old Testament, the coming of the Messiah was described also as the coming of God.

In chapter 4, Evans contests Ehrman’s claims that it is historically unlikely that Jesus was buried, and by extension, that his tomb was later discovered to be empty. This chapter is very strong, and contra Ehrman (who neglected archeological evidence), Evans demonstrates from ample and compelling literary and archaeological evidence that Roman law did permit burial of crucified criminals, and that Roman authority in Israel at the time of Jesus did respect Jewish burial traditions in which all the dead, including crucified criminals, were to be buried before nightfall.

In chapter 5, Gathercole responds to Ehrman’s chapter in which he asserts that the earliest Christology from the earliest Christian witness (e.g. the Synoptic gospels) is an exaltational/adoptionistic one–that is, that Jesus was a mere man whom God adopted as son at the baptism and exalted at the resurrection. Whereas Ehrman believes that a Christology of preexistence came later, Gathercole asserts the Synoptic Gospels do have a Christology of preexistence and shared divine identity with God. Exaltation language in Scripture is shown to be economical rather than ontological–that is, what changed at Jesus’s exaltation pertains not to his identity/being/essence, but rather, His role and authority.

In chapter 6, instead of responding to one of Ehrman’s chapters, Tilling points out some problems with his overall interpretive approach in How Jesus Became God. The errors in Ehrman’s monotheism, his use of the word “divine,” his distinction between exaltation Christologies and incarnational Christology, and his claim of a dubious reading of Galatians 4:14 (as communicating that Jesus was an angel) being the interpretive key for Pauline Christology, are all examined. Tilling moves on in chapter 7 to tackle problems with Ehrman’s exegesis in relation to his Pauline Christology. He first addresses three explanatory conditions that must be met in order to best grasp Paul’s “divine Christology” and then makes five critical observations about Ehrman’s treatment of Paul. Tilling exposes several problems with Ehrman’s exegesis of the Christ hymn of Philippians 2 through which Ehrman concludes Jesus definitely was not God prior to becoming human. Not only is Ehrman’s exegesis here flawed, but it is problematic that this is the sole passage he engaged with in-depth in his construction of Pauline Christology in How Jesus Became God. Tilling’s chapter concludes with a quick look at some of the problems in Erman’s reading of the Gospel of John and the letter to the Hebrews.

How God Became Jesus concludes with two chapters by Hill pertaining to Ehrman’s concluding two chapters, which cover Christological developments on the road to Nicaea. In chapter 8, Hill reviews Ehrman’s assertions about a number of Christological “dead-ends” and heterodoxies of the second and third centuries, arguing that orthodoxy was not the product of “heresy hunters rewriting history.” In the concluding chapter, Hill scrutinizes Ehrman’s proposal of “ortho-paradoxes.” This is Ehrman’s word for what we would simply call paradoxes. In relation to doctrines such as the Trinity and the deity and humanity of Christ, Ehrman’s contention is basically that contradictions caused the orthodox to “settle” for the paradoxes. Hill shows that Christ being both God and human is a paradox within the New Testament, not an “ortho-paradox” that resulted later from the orthodox struggling to come to grips with irreconcilable contradictions.

Finally, Hill responds to Ehrman’s charge in his epilogue that there is a close connection between believing in Christ’s deity and violent, Christian anti-Judaism. This is an important point for Ehrman, as he starts priming the reader for it several chapters in advance. Without reducing the tragedy of what has happened, Hill shows that persecution of Jews is not really traceable in any major way to the belief in the deity of Christ.

Having read Ehrman’s book first and having taken notes on things I found dubious, I did not feel that everything was adequately addressed in How God Became Jesus. For example, in chapter 2 Ehrman is largely trying to convince the reader that “to make Jesus divine, one simply needs to think of him as an angel in human form” (Ehrman 61). In his response Bird did not adequately show that Jesus is not an angel, but rather, at the top of the divinity pyramid with God. Bird’s arguments show Jesus to have authority over the angels, but within the spectrum of divinity that Ehrman posits there is a hierarchy among angels. Jesus could be the chief among angels with authority over all other angels.

There is only one glaring omission in this book: Ehrman’s fifth chapter is not addressed at all. That chapter concerns what we can know about the resurrection, which according to Ehrman is the fact that some of Jesus’ followers came to believe that he was raised from the dead. Ehrman of course seeks to explain the disciples’s experiences of seeing the resurrected Christ in a a naturalistic way, comparing the phenomenon to bereavement visions, visions of esteemed religious figures, and modern-day claims of Jesus’ appearance. [Editor’s note: Gospel-Centered Discipleship will be running a post tackling this chapter from How Jesus Became God. Jonathan Dodson moves through each of Ehrman’s assertions and addresses them succinctly and pastorally.]

The strongest chapter was probably Evans’s chapter on the burial traditions and evidences. The chapter it’s responding to assert that it’s historically unlikely that Jesus was buried in a tomb. If this claim is given credibility, it could put a death knell in the credibility of the resurrection. Evans masterfully, from literary and archeological evidence, shows that a decent burial in a tomb was not, as Ehrman had argued at length, inconsistent with Roman policies and practices concerning crucified criminals. Overall, How God Became Jesus provides a strong response to Ehrman’s book. The evangelical contributors truly comprise a dream-team in terms of expertise on the relevant subject matter. They have published in some of the most prestigious academic journals in New Testament studies and historical Jesus studies, some of the same journals in which Ehrman has published.

Every Christian should read How God Became Jesus--and I don’t say this often. The ideas put forth in Ehrman’s books regularly become popularized and are regurgitated by opponents of Christianity. These kinds of christological debates are never confined to academic circles. They bleed into our real life conversations with your non-Christian friends, family, and co-workers. Will you know how to respond? Will you be able to cogently defend from history and the Scriptures that Jesus is Lord? How God Became Jesus is a great starting point. And if you don’t find all your questions answered, endnotes provide key books for further reading.

Jennifer Guo is a bean counter by day and a book eater by night. She is passionate about the gospel and loves biblical and theological studies. She also loves the artsand is part of a performing arts ministry that uses a variety of mediums to communicate the gospel, God’s heart, and His design for sexuality, relationships, and marriage. Jennifer also loves running and cooking (and not because running allows her to eat more). You can follow her @JenniferGuo or read more reviews at her blog Jennifer Guo.