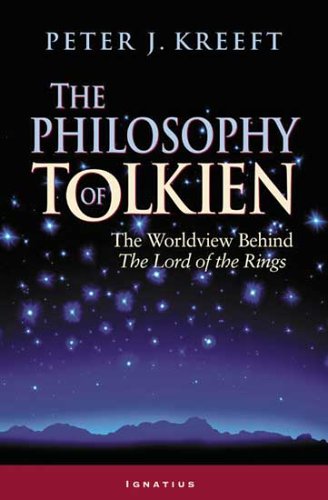 The Philosophy of Tolkien: The Worldview Behind The Lord of the Rings
$10.14
By Peter Kreeft

I wasn’t planning on reviewing this one, but had so many requests for my thoughts on it that I figured I might as well put pen to paper. I read this as part of my research for the next book I’m working on and also because I’m a Tolkienphile. With that in mind, The Philosophy of Tolkien was the most enjoyable book I’ve read in a very long time and should be required reading for anyone who loves Tolkien. Kreeft opens the wardrobe to Middle-earth. I feel like I know Tolkien and Middle-earth better after reading this. That’s a feat considering how many times I’ve read Tolkien’s stories. On the other hand, I shouldn’t be surprised because “The Lord of the Rings is a deep mine with many precious gems,” Kreeft says, “deep enough for many others to plumb to their hearts’ content” (20).

The format is straightforward. Kreeft discusses the big questions of philosophy with Tolkien’s point of view in his line of site. Each assertion is backed up by quotations from The Lord of the Rings, his other writings (regularly his Letters and The Silmarillion), and usually C. S. Lewis.

I would normally point you to some of my favorite sections at this point, but I have underlines, notes, marginalia, and the like on almost every page. It’s a repository of wisdom on Tolkien. I will mention I enjoyed how Kreeft shows how poorly the critics of Tolkien (who can’t stand that The Hobbit and The Lord of the Rings are beloved classics and can’t stand The Lord of the Rings was voted book of the Millennium and Tolkien the most influential authors of the 20th century) understand him or his work. They cannot wrap their minds around someone who holds to a Christian worldview during a time where modernism and then postmodernism were infecting all of literature. It’s like trying to explain the intricacies of delicate and delicious coffee to someone who has no taste buds. They’re just as happy with Folgers instant coffee than a single source, shade grown, hand picked coffee bean roasted to perfection.

I must give credit where credit is due. Nate Claiborne recommended this book to me. I wouldn’t have read it without his thumbs up. I’ve read a lot of Tolkien criticism and have been left disappointed with most of it. Kreeft doesn’t disappoint.

Mathew Sims is the author of A Household Gospel Fulfilling the Great Commission in Our Homes and has written for CBMW Men’s blog, Gospel Centered Discipleship, Borrowed Light, and Servants of Grace. He also works as the managing editor at Gospel-Centered Discipleship. They attend Downtown Presbyterian Church (PCA) in Greenville, SC.