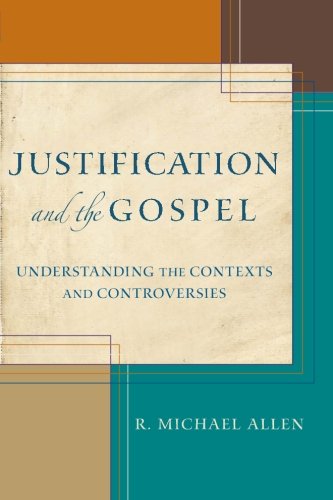 Justification and the Gospel: Understanding the Contexts and Controversies
$16.73
By R. Michael Allen

Is justification by faith alone the articulus stantis et cadentis ecclesiae (the article by which the church stands or falls)? For as long as I can remember as a Christian, I’ve passionately espoused this classic Protestant affirmation. Yet it is one that seems to be increasingly unpopular, both in the academy and in the pew. Not only is the centrality of justification being contested, but the very definition of the doctrine itself is being (and has been for the past few decades) hotly debated and sometimes revised. The most well-known of these revisions is probably the so-called “new perspective(s) on Paul.” Though it didn’t originate with N. T. Wright, he is probably the proponent most well-known outside of the academy.

Alongside works reframing/revising the doctrine of justification, responses to these renderings abound. Most responses maintain their respective dichotomies (e.g. arguing for justification as opposed to participation, pistis Christou as referring to faith in Christ rather than faith of Christ). Furthermore, ecumenists and exegetes have dominated the debates, with systematic theologians playing a marginal role. In Justification and the Gospel: Understanding the Contexts and Controversies, R. Michael Allen offers a fresh, alternative approach to the topic of justification sola fide (by faith alone).

Part 1 is a broad consideration of the link between justification and the gospel. The two chapters here consider the following thesis:

“the gospel is the glorious news that the God who has life in himself freely shares that life with us and, when we refuse that life in sin, graciously gives us life yet again in Christ. While participation in God is the goal of the gospel, justification is the ground of that sanctifying fellowship” (3).

Part 2 looks at recent debates regarding the work of Christ for us. Chapter 3 reflects upon the earthly journey of Christ as a pilgrimage of faith. Attention is devoted attention to recent debates in Pauline studies concerning pistis Christou, a phrase that recurs in crucial Scriptures related to the gospel and salvation. The issue is whether the phrase refers to faith in Christ or the faith of Christ. Allen argues for pistis Christou as faith of Christ; firstly as necessary for those who affirm Protestant soteriology (and specifically justification by faith alone by means of double imputation), and secondly as coherent with Nicene and Chalcedonian Christology. Chapter 4 explores the question of how we relate Christ’s faith to the call for Christian faith.

Finally, Part 3 explores how Christ’s work for us takes operative form in the work of Christ in us. Chapter 5 addresses the issue of justification and sanctification, answering the objection that the Protestant doctrine of justification sola fide leads to antinomianism. Allen traces the exodus narrative, the Ten Commandments, and several key Pauline texts to show that forensic justification fuels lives of service and good works. The book concludes with a chapter on justification and ecclesiology, in which Allen suggests that theology proper, Christology, pneumatology, soteriology, and eschatology must all shape our ecclesiology. Furthermore, the church is simul justus et peccator (at the same time justified and sinner). The chapter and book concludes with a look at some of the typical moments in the Christian liturgy, showing how “[e]ach points behind and beyond the worshiping community to its source of life and blessedness, the gospel of Jesus and the promise of the triune God” (176).

R. Michael Allen has written a helpful book on the doctrine of justification in light of recent debates. Allen’s approach is distinctive because he situates justification within the context of Christian theology as a whole, because he analyzes the issues through the lens of dogmatic theology, and because he employs theological interpretation of Scripture. While affirming the importance of justification sola fide, Allen shows that the doctrine doesn’t answer all pertinent questions and can’t, without qualification, be referred to as the articulus stantis et cadentis ecclesiae.

In many ways, this book is a valuable read for those who hold to classic Protestant soteriological affirmations because it can help us see some of our myopia and to realize that some of the ideas we’ve rejected are actually mutually reinforcing with justification. This book is also a valuable read for those who feel the classic Reformation articulation of justification sola fide will not cut it today. Allen shows that many of the supposed problems with doctrine are alleviated when viewed in its proper dogmatic location. So in the end, this is a great book for anyone with interest in the doctrine of justification and the recent debates. While moderately academic, there are also many portions that have a devotional feel, where Allen’s prose moves you to worship. This is an added strength of this book. Though theology should always lead to doxology, theological texts don’t usually have this immediate effect.

Jennifer Guo is a bean counter by day and a book eater by night. She is passionate about the gospel and loves biblical and theological studies. She also loves the artsand is part of a performing arts ministry that uses a variety of mediums to communicate the gospel, God’s heart, and His design for sexuality, relationships, and marriage. Jennifer also loves running and cooking (and not because running allows her to eat more). You can follow her @JenniferGuo or read more reviews at her blog Jennifer Guo.