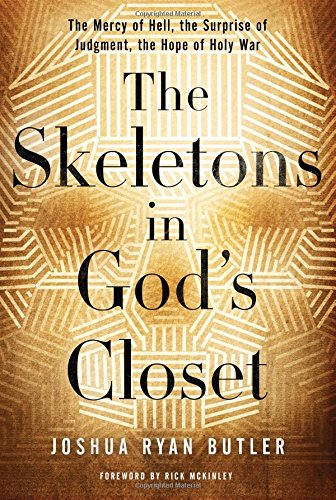 One of the most perennially difficult questions concerning God is related to His goodness: How can He be good when suffering and evil exist? Isn't God a sadistic, egomaniacal monster for sending countless people to the torture chamber of hell for refusing to worship Him? How could He command the Israelites to slaughter the Caananites in the Old Testament? These are not only some of the biggest objections non-Christians have to the Christian faith, but they are issues Christians struggle and wrestle with as well. In The Skeletons in God's Closet, Joshua Ryan Butler offers a fresh approach to answering these questions by confronting the popular caricatures of hell, judgment, and holy war and demonstrating that in the actual photographs God is good. While we tend to think that hell, judgment, and holy war are the skeletons in God's closet, Butler shows us that when properly understood, these difficult topics show that God is good to His very bones.

Part 1 confronts the caricature of hell as an underground torture chamber. Butler helpfully paints a picture of the grand biblical storyline of heaven and earth and illuminates how the subplot of hell fits into that story. He takes our charges against God and turns them back on us, helping us see that we are the problem. Butler provides valuable insights into Gehenna and Sheol helping us reclaim a healthy understanding of hell. “Hell is not a place God creates to torture sinners, but a power God excludes to protect the robust vitality of his kingdom. God's purpose of containment, in radical contrast to the caricature, reveals a motive of mercy. God's mercy redeems the human community and reconciles the broader creation from the destructive power of sin. Perhaps more surprisingly, however, God's mercy is also seen in his treatment of the impenitent: he does not torture or kill them, but rather hands them over to their desire” (62).

In Part 2, Butler turns his attention to the subject of judgment. He helps the reader see that judgment is good news because of the deception of appearances, the brutality of history, and the bondage of creation. God judges the world to heal the world. In this section, Butler focuses much on an aspect of judgment that may be surprising—that those who seem upright and claim to know God end up cast out, but the outcasts and flagrant sinners are welcomed in. He offers sobering reminders to Christians that judgment begins with us. He also addresses the particular difficulties of the countless peoples throughout history who had no way of receiving a gospel witness, as well as those of other world religions today.

Finally, in Part 3, Butler covers the troubling topic of holy war. Against the common notion of holy war as the strong with advanced weapons demolishing the weak to advance their civilization, Butler shows that the OT scenario is the exact opposite—God rising up on behalf of the weak against the tyranny of the strong. Butler confronts the caricature of OT holy war and the scary, tyrannical picture of God that it presents by showing that the cities God commanded Israel to take out were military strongholds, that the language of warfare in the OT employed conventional exaggerated war rhetoric, and that the Caananites were “driven out,” not “killed off.” Butler also shows that God was patient with Canaan for a very long time, and that Canaan was way more violent than we typically think. In the last few chapters, Butler returns to eschatology by talking about how Jesus is coming to wage holy war on Babylon and the reconciled world that is coming.

The Skeletons in God's Closet offers a refreshingly conversational and poetic response to the difficult questions concerning hell, judgment, and holy war. It's an especially effective book for those who might not connect with a more intellectual and dry style. Butler speaks to the heart and soul while still interacting with biblical texts and backgrounds as well as some preeminent thinkers (mainly C. S. Lewis and N. T. Wright). For those who are passionate about doctrine and grounded in the traditional view of hell, Butler shines an important and necessary spotlight on angles we are likely to neglect/overlook (such as reconciliation and social justice).

For reformed folk like me who are concerned about doctrine, God's glory, and gospel-centeredness the corrective emphasis on social justice and the restoration/reconciliation of humanity is helpful, but I am concerned by what is de-emphasized. There seems to be more of an anthropocentric focus throughout the book than a theocentric one; the implications of hell, judgment, and holy war on humanity are the focus while God's holiness and just wrath are in the background. Sin's effects on humanity receive much attention, but its offense to a perfect God is hard to detect. God's judgment making things right for man and creation are rightfully illuminated, but one does not feel the weight of God vindicating his own name from reading these pages. Some of the inclusivistic tinges also give me pause (e.g. “many who never recognized him are told that he's known them all along” p. 113) as well as a lack of emphasis on knowing and loving Christ as the primary difference between Christianity and other religions (pp. 178).

Even with those reservations and disagreements, there is much to commend in The Skeletons in God's Closet. In the final analysis, it's a book I can heartily recommend for many, but might only recommend with caution for others. With discernment there is much to gain and learn from it.

Jennifer Guo counts beans by day and eats books by night. She is passionate about the gospel and loves biblical and theological studies. She also loves the arts and is part of a performing arts ministry that uses a variety of mediums to communicate the gospel, God’s heart, and His design for sexuality, relationships, and marriage. Jennifer also loves running and cooking (and not because running allows her to eat more). You can follow her @JenniferGuo and read more of her thoughts at Jennifer Guo.