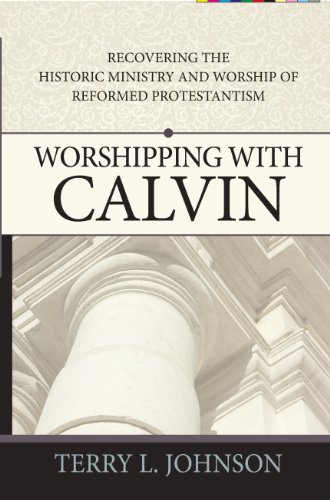 Worshipping with Calvin
$16.94
By Terry Johnson

Worshipping with Calvin is much needed in today’s church because it asks important questions about the tacit liturgy in most evangelical and even Reformed churches. It also focuses on more than just Calvin’s worship (although that focus is present through out)—because Calvin was so strident in connecting his practices to the catholic church before him. Johnson says, “Catholicity of worship and ministry and the communion of all the saints are inseparable” (280 see also p. 58). This return looks like a simple liturgy focused on the work of the Triune God—it’s gospel-driven. In the book, Johnsons quote Ligon Duncan in making an important point: Reformed worship and ministry passes “‘the test of the catacombs’” (314). How silly would some of the pomp of the Roman Catholic Church look in the catacombs of the persecuted and even more so the performance/experience/entertainment worship so prevalent in evangelicalism.

Worshipping with Calvin starts off making the case for why Reformed worship and ministry is important and how it was historically practiced in the Reformed churches. An important point is made by Johnson in these early chapters, namely liturgy informs doctrine and living (23). How we worship says something God and right liturgy should provide impetus for living when Christians are sent out from the church.  He outlines fives broad categories for Reformed worship and ministry and the rest of the book fleshes these out.

Churches assemble in worship for a finite amount of time. Stewardship of that time requires that it be put to its most edifying use. Reformed worship and ministry should be preserved, we insist, because in the right hands it does a vastly better job than the alternatives of being God-centered, Bible-filed, Christ- (or gospel-) structured, church-aware, and Spirit-dependent” (60).

For me the strongest parts of the book were found in sections where Johnson was surveying Reformed practice and also connecting it back to the early church. He does a masterful job connecting the reader to original sources and providing pertinent quotations. The split chapter on Bible-filled were the highlight in this regard. Johnson shows fundamentally that Reformed worship and ministry is worship and ministry saturated with the Scripture—from Scripture reading, to preaching, to praying, to singing, to the call to worship and benediction. In as far as Reformed churches today follow this practice they are faithfully following the ancient and reformed liturgy of the Church.

I had a couple quibbles. In the second Bible-filled chapter, Johnson describes how the sacraments are actually “visible words” (as Augustine coined), and he does an excellent of positively positioning the Reformed view of the Lord’s Supper, but misses slightly in describing the Lutheran position as consubstantiation (see 165-66). I’ve had the joy of interacting with Lutherans regularly over the last year and to a man none of them describe their position as consubstantiation. Also, in this same section, I think there’s more to be said about the frequency (or lack thereof) in Reformed Churches. Johnson says, “We can see from the foregoing that the central place occupied by a covenantal eucharist in the Reformed church will not allow us to confuse the frequency of administration with importance of observance” (179). I’m not sure it’s that easy of an issue to gloss over. No doubt, in my humble estimation, the Reformed view of Eucharist is correct, but with such a high view described as well as Johnson does why would the Reformed church in general neglect it as a part of its weekly liturgy—something Calvin argued for during his ministry. In light of that, it’s an odd that in a book entitled Worshipping with Calvin his position isn’t given more consideration.

Last point, while I’m in complete agreement with the structure of Reformed worship and ministry presented herein and also with his dismay over the market-driven worship of today’s evangelical boomer churches, I did feel like some of the cultural analysis was off. I don’t have time in this review to describe all of my concerns, but mainly I felt like there was some equivocation in describing the essentials of the liturgy and the peripherals. So while I agree that having a cowboy church, or hip hop church is not a good thing. We must pursue diversity of all kind. In different cultural contexts and in different places, won’t the fleshing out of the Reformed liturgy, the peripherals, differ slightly? I thought the cultural analysis parts of the book seemed the weakest.

Overall, an excellent work and one that needs to be read and re-read. Don’t let the few concerns I had prevent you from picking up this book. The focus on Scripture and church history for support of the Reformed worship and ministry make this an invaluable resource for the church. Terry Johnson has made an offering to the church that shouldn’t go unnoticed or unread.

Mathew B. Sims is the author of A Household Gospel: Fulfilling the Great Commission in Our Homes and writes for CBMW Manual, Gospel-Centered Discipleship, Borrowed Light, and other publications. He also works as the managing editor at Gospel-Centered Discipleship and offers freelance editing and book formatting services. He is covenant member at Downtown Presbyterian Church in Greenville, SC.