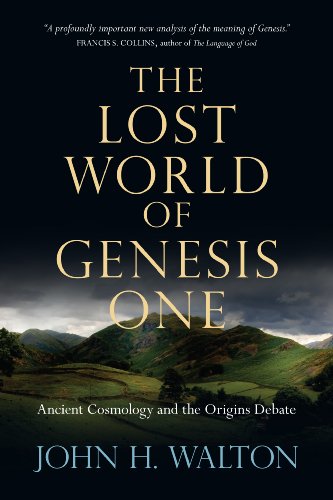 The Lost World of Genesis One: Ancient Cosmology and the Origins Debate
By John H. Walton

The driving premise of The Lost World of Genesis One is that the Genesis account of creation isn’t conveying information about the creation of the material world--it’s about creating function. I don’t know your background, but I grew up in a very conservative Christian background where the Genesis account is important--seven day creationism, creation ex nihilo, historical Adam and Eve, young earth, and evolution no no!

Many of these items are important to me today (the historicity of Adam and Eve, for instance, is crucial for theological reasons). However, I’m always willing to reevaluate my interpretation of Scripture when robust evidence from Scripture is brought to light. The Church hasn’t had a singular interpretation of Genesis one and so I believe there’s freedom in some aspects to hold to different positions, while holding tight to essentials in the narrative.

Dr. John Walton does just this. Instead of a material creation, Walton argues for a functional creation account. He demonstrates this through two lines of argumentation. First, he examines how the word creation (bara) is used. He provides three options: material, functional, or unclear. He argues all examples of bara are either clearly functional or unclear (very few in the overall analysis). He then looks at the data we have been able to gather from other ancient Near Eastern (aNE) cultures. He looks at how their creation account were told and how aNE people thought of creation. He argues from that data and the exegetical data that aNE culture (including Israel) had no concept of material creation. Most aNE culture had creation accounts of gods bring order to chaos (sometimes pictured through taming another god or the waters). In a way then, the Genesis account serves as a polemic against those accounts.

What’s crucial for Walton’s position is that understanding the creation account in this functional way doesn’t necessitate holding to a scientific position (intelligent design, evolution, young earth, or old earth). It removes these considerations out of the realm of dogma. One of the strengths of The Lost World is Walton’s clearing away the smoke. He does this not only in Genesis one, but also in talking about evolution and intelligent design. He demonstrates that evolution may account for the natural process, but it cannot speak scientifically to the teleology (purpose), whereas Intelligent Design deals with teleology alone and not the natural process. For example, if a scientist believes evolution accounts for the natural data, he cannot through science confirm it was a blind process. That’s teleology. Walton shows how these conflations of science with philosophy should be remedied by science teachers sticking to the observable facts and staying out of the teleology of the matter and schools offering robust philosophical classes.

One final observation, Walton isn’t arguing that God didn’t create the material world. He says he definitely did--but that Genesis isn’t the account of that. He uses other New Testament Scripture to demonstrate God created the material world. Being honest with the text must not only drive us to what it is positively saying, but also to what it’s not saying. The church of the last hundred years has overlayed its scientific concerns and worldview over the Genesis creation narrative and extrapolated from there. We must reverse this. We must return to what the text actually says. Walton’s The Lost World of Genesis One is a great place to start. I’d be interested in seeing how/if other biblical scholars respond to the exegetical work done in The Lost World. If you’re interested in the creation debates, The Lost World is a must read. It’s written at a level that non-seminary trained Christian would have no problems reading through it.

[Editor Note: Let me flesh out what holding this functional creation position might look like. Walton briefly provides strong evidence for a literal seven day creation, although he says it’s not integral for his position. It doesn’t require one hold a scientific position on the age of the earth. After reading Walton’s arguments and exegesis, I believe he is correct. I can, therefore, hold to a functional creation narrative for Genesis one, historical Adam (special creation, not archetypal), seven literal days for creation within a temple framework. That’s the dogma side. From the small amount of reading I’ve done in science texts, I’m not convinced of evolution. I don’t think it’s the best way to explain all the physical data. However, I do think there’s strong evidence that the earth is very old. It’s important to understand these last bits are no longer theological concerns in Walton’s view.

Chris Donato, communication director at Trinity, former senior associate editor of Tabletalk magazine, and editor of Perspectives on the Sabbath (B&H) wrote a stellar series on The Lost World of Genesis One. If you’re interested in getting a more in-depth analysis of Walton’s view, his posts are a must read.]